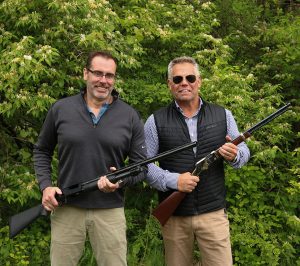 On Friday, May 10, thirty-three teams enjoyed a beautiful spring day in the great outdoors! The event began at noon with a Jersey Mike’s lunch followed by a safety training. Guests then hit the course for a 25-station clay shoot with 100 targets.

Following the tournament, attendees and their spouses enjoyed a relaxing celebration at the lodge. Butterbee’s American Grille served a popular fresh burger bar with a feast of toppings, Saratoga chips, cole slaw and Tender Towne’s chicken tenders. Over dinner, guests also sipped on craft beer and bourbon while listening to live-music by Tom Kaper.

The after-party also included an energetic live-auction that raised more than $16,000. Guests bid to win a selection of exciting prizes, including two exclusive packages donated by the Indian Hill Rangers to be ‘Ranger for a Day’, a private Eddie Merlot’s dinner with wine pairings and a getaway to Winghaven Lodge.

Kevin Hubert and Clark Harris of the Cincinnati Bengals were also in attendance and generously donated two packages for high bidders to receive four tickets to a home game of their choosing and footballs signed by their fellow Bengals teammates.

Sporting Clays Tournament founders and co-chairs Peter Borchers and Brian Folke also sought to expand the event in its third year by adding a private tournament on Saturday, May 11. The second day was exclusively attended by sponsors and also featured a lunch by Jersey Mike’s as well as a selection of premier raffle packages.

Before guests hit the course, Executive Director thanked all of the event's attendees and sponsors for supporting Stepping Stones.

Dr. Shawn Carson on the course.

Following Friday's tournament, guests relaxed at the lodge with live-music by Tom Kaper.

Thank you Mike and Linda LeVally for volunteering to help with registration!

Thank you Stepping Stones' board members Terri Hogan and Patti Zesch for volunteering to help with registration and scoring at the tournament.